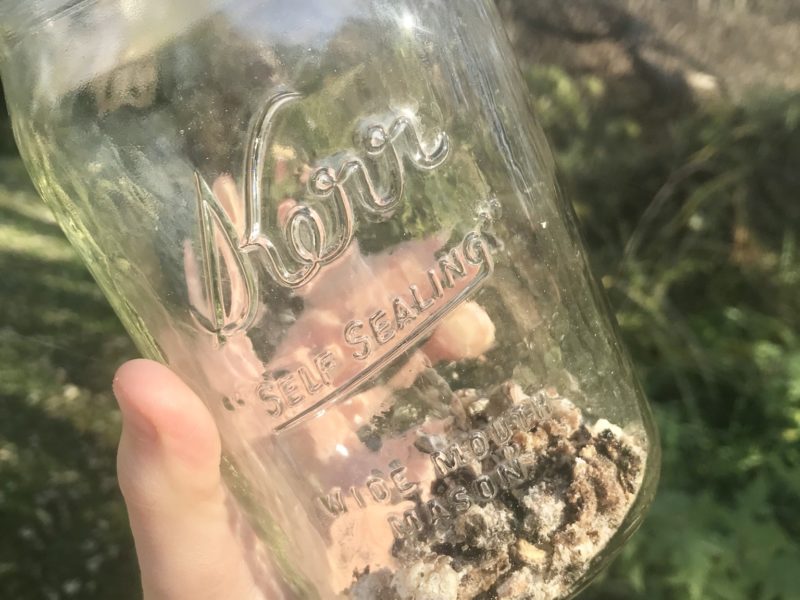 Now, this may be something that very few people ever feel the need to do- but I wanted to write it up anyway!

I found my need of pine rosin when I decided to try my hand at making beeswax wraps. The wraps that didn’t contain the rosin were not as sticky, and they definitely need to be to work the way they’re meant to. You can find that post here

I could have easily ordered some off amazon. It’s not hard to find. Or even really expensive. There’s just something about the challenge of making something myself that really appeals to me. So I sat down with my good friend youtube and watched a lot of videos on how to collect and clean the resin. Talk about scary! Most videos showed heating the resin in a tin can over an alcohol burner. Thanks, no thanks. After typing in “How to clean resin without alcohol burner” I found an old post someone had made using a pot of water instead! That was more my speed.

First things first, I had to find some resin. We have plenty of pine trees around the property so that didn’t take long. I really didn’t want to cause any harm to the tree just to make my wraps, so I looked for areas on the tree that were already healing. Places where branches had been broken off or trimmed. There would be a sticky deposit there ranging from amber to dark brown. It was kinda stinky, not gonna lie. I used a butter knife (that will never be used for anything ever again! More on that later) and carefully cut off very small pieces. I collected from 4 different trees, being careful not to take very much from each spot.

After I had collected the resin I put it in a drawstring cotton bag. Then I filled a pot with water (Again, one that will never be used for anything else!) and turned the heat to medium. I lined my counters with newspaper because I anticipated a mess. I was not wrong.

Place the cotton bag in the hot water and let it do it’s thing. As the resin heats up it starts separating from the debris from the tree. It will seep through the fabric and into the water. I filled a bowl with cool water and places that on my newspaper. Using a spoon I scooped up the yellow drops that were seeping from the bag and dropped them in the water. Be careful not to tough the cool water with your spoon or the resin will stick.

The whole process took maybe 15 minutes. I used my spoon to press the bag and release any more melted resin. When I wasn’t getting much out anymore I turned the heat off and questioned my life. Everything was covered in resin. I seriously tried to be careful, but it was everywhere. I had hoped to clean my bowl afterwards (hahahahaha) that resin is stuck for life!

I decided to use a little tin I found to store my resin. I used the spoon to scoop out the droplets from the cool water and put them in my little tin. Next, I set up a double boiler and placed the tin in the top. As it melted down to a more smooth consistency, I checked out the bag of debris. It was pretty cool to see how much of my “resin” had really been bark and dirt.

I used the rosin as I intended- to make beeswax wraps. It worked perfectly for that! Is it something I’d do again? Probably not. But it was a fun experience anyway.

How to make your own beeswax wraps
Next Post: Easy DIY lip balm